Nokia 6.1 Plus will be Flipkart exclusive when it launches in India tomorrow, on August 21. The e-commerce platform already has a banner page ready with a teaser for the upcoming smartphone. While it does not mention the Nokia 6.1 Plus has such,  the Nokia Mobile India Twitter handle has also shared a similar video on its official feed

On its Twitter page, Nokia Mobile India tweeted, “We are thrilled to bring you the Nokia smartphones event for the most awaited phone. Stay tuned to #BringItOn with #NokiaMobile” along with a video. A similar video is used on Flipakrt. Nokia 6.1 Plus is officially the company’s first smartphone to sport a notch and has an aspect ratio of 19:9 on the display. The phone was first launched in China in May 2018 and is called the Nokia X6 in that market. 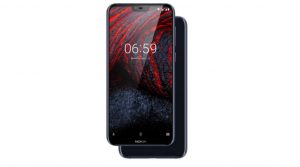 However, later on HMD Global, decided to introduce global variants of the Nokia X6, which is called as Nokia 6.1 Plus in markets outside China. The phone has officially been launched in Hong Kong for a starting price of HKD 2,288, which is around Rs 20,000 plus on conversion. Nokia 6.1 Plus will also come with dual-rear cameras at the back.

Earlier, the smartphone’s user guide was also spotted on the Nokia India website with DoT certification mentioned for Nokia 6.1 Plus, which pretty much confirmed an India launch. Additionally, the company has slashed the price of Nokia 6.1 or Nokia 6 (2018) version by Rs 1,500. The phone will now cost Rs 15,499 for the base 3GB RAM and 32GB storage version.